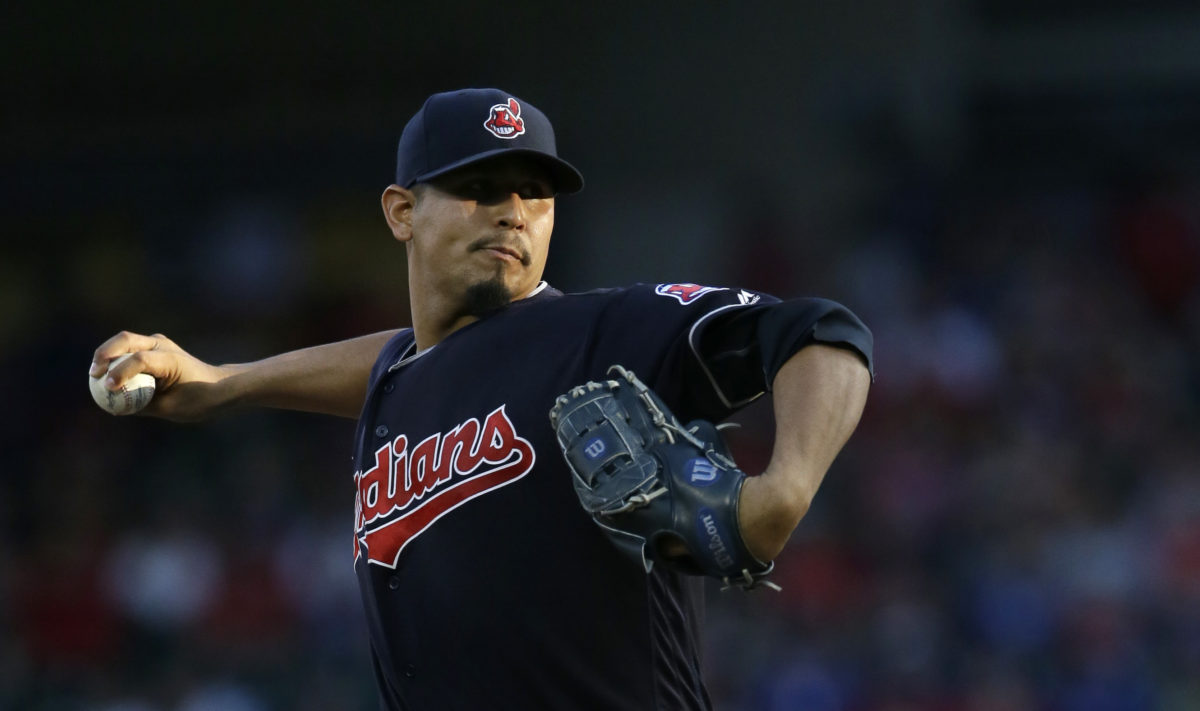 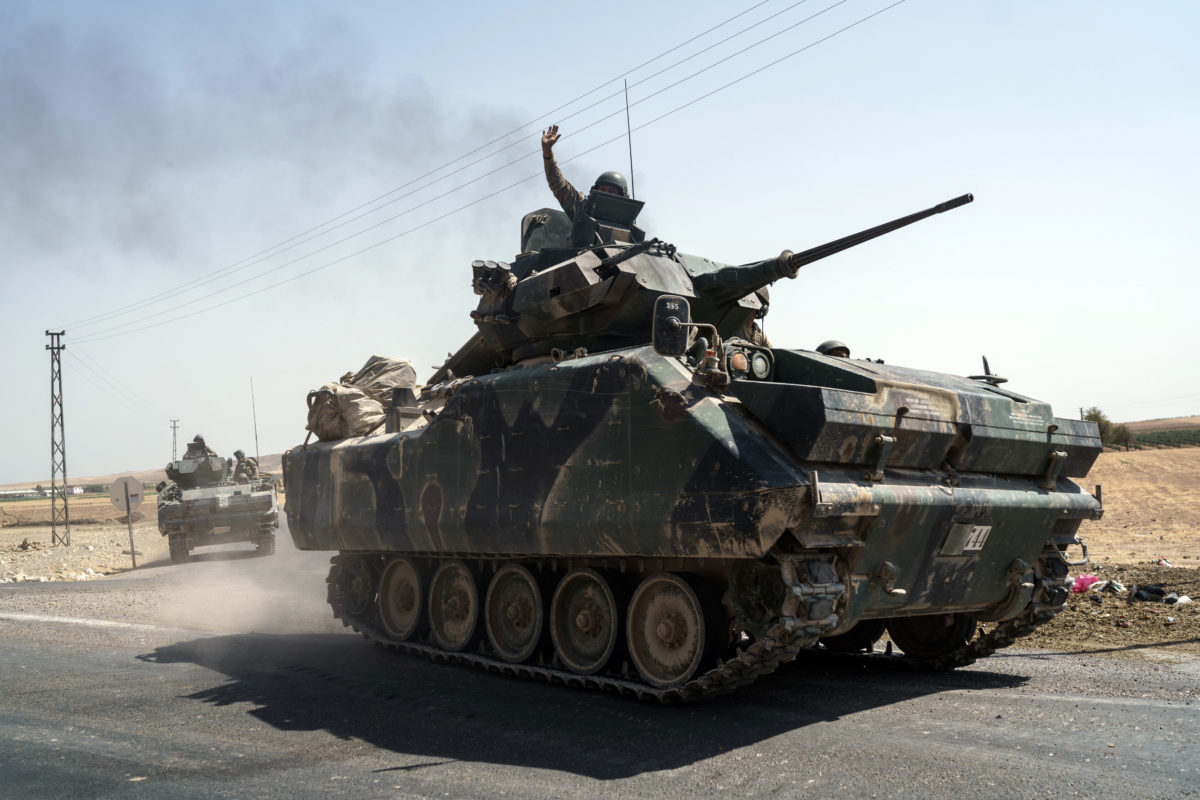 By SARAH EL DEEB, Associated Press
BEIRUT (AP) — Turkey-backed Syrian rebels seized a number of villages and towns from Kurdish-led forces in northern Syria on Sunday amid Turkish airstrikes and shelling that killed at least 35 people, mostly civilians, according to rebels and a monitoring group.
Turkey sent tanks across the border to help Syrian rebels drive the Islamic State group out of the frontier town of Jarablus last week in a dramatic escalation of its involvement in the Syrian civil war.
The operation, labeled Euphrates Shield, is also aimed at pushing back U.S.-allied Kurdish forces. The fighting pits a NATO ally against a U.S.-backed proxy that is the most effective ground force battling IS in Syria.
Turkey’s official Anadolu news agency said Turkish airstrikes killed 25 Kurdish “terrorists” and destroyed five buildings used by the fighters in response to attacks on advancing Turkish-backed rebels in the Jarablus area.
The Turkish military is “taking every precaution and showing maximum sensitivity to ensure that civilians living in the area are not harmed,” Anadolu reported.
A Turkish soldier was killed by a Kurdish rocket attack late Saturday, the first such fatality in the offensive, now in its fifth day.
Various factions of the Turkey-backed Syrian rebels said Sunday they have seized at least four villages and one town from Kurdish-led forces south of Jarablus. One of the villages to change hands was Amarneh, where clashes had been fiercest. Rebels posted pictures from inside the village.
Ankara is deeply suspicious of the Syrian Kurdish militia that dominates the U.S.-backed Syria Democratic Forces, viewing it as an extension of the Kurdish insurgency raging in southeastern Turkey. Turkish leaders have vowed to drive both IS and the Kurdish People’s Protection Units, or YPG, away from the border.
The SDF crossed the Euphrates River and drove IS out of Manbij, a key supply hub just south of Jarablus, earlier this month. Both Turkey and the United States have ordered the YPG to withdraw to the east bank of the river. YPG leaders say they have, but their units play an advisory role to the SDF and it is not clear if any of their forces remain west of the Euphrates.
Turkey is part of the U.S.-led coalition fighting IS, but the airstrikes that began Saturday marked the first time it has targeted Kurdish-led forces in Syria.
The Britain-based Syrian Observatory for Human Rights said the bombing killed at least 20 civilians and four Kurdish-led fighters in Beir Khoussa, a village about nine miles (15 kilometers) south of Jarablus, and another 15 in a village to the west.
ANHA, the news agency of the Kurdish semi-autonomous areas, said Beir Khoussa has “reportedly lost all its residents.”
SDF spokesman Shervan Darwish said the airstrikes and shelling started overnight and continued Sunday along the front line, killing many civilians in Beir Khoussa and nearby areas. He said the bombing also targeted Amarneh village. He said 50 Turkish tanks were taking part in the offensive.
Syrian state news agency SANA reported that 20 civilians were killed and 50 wounded in Turkish artillery shelling and airstrikes, calling it Turkish “encroachment” on Syrian sovereignty under the pretext of fighting IS. Turkey is a leading backer of the rebels fighting to overthrow Syrian President Bashar Assad.
An Associated Press reporter in the Turkish border town of Karkamis spotted at least three Turkish jets flying into Syria amid heavy Turkish shelling from inside Syrian territory on Sunday morning.
_______________
Associated Press writer Zeynep Bilginsoy in Istanbul and Mucahit Ceylan in Karkamis, Turkey contributed to this report 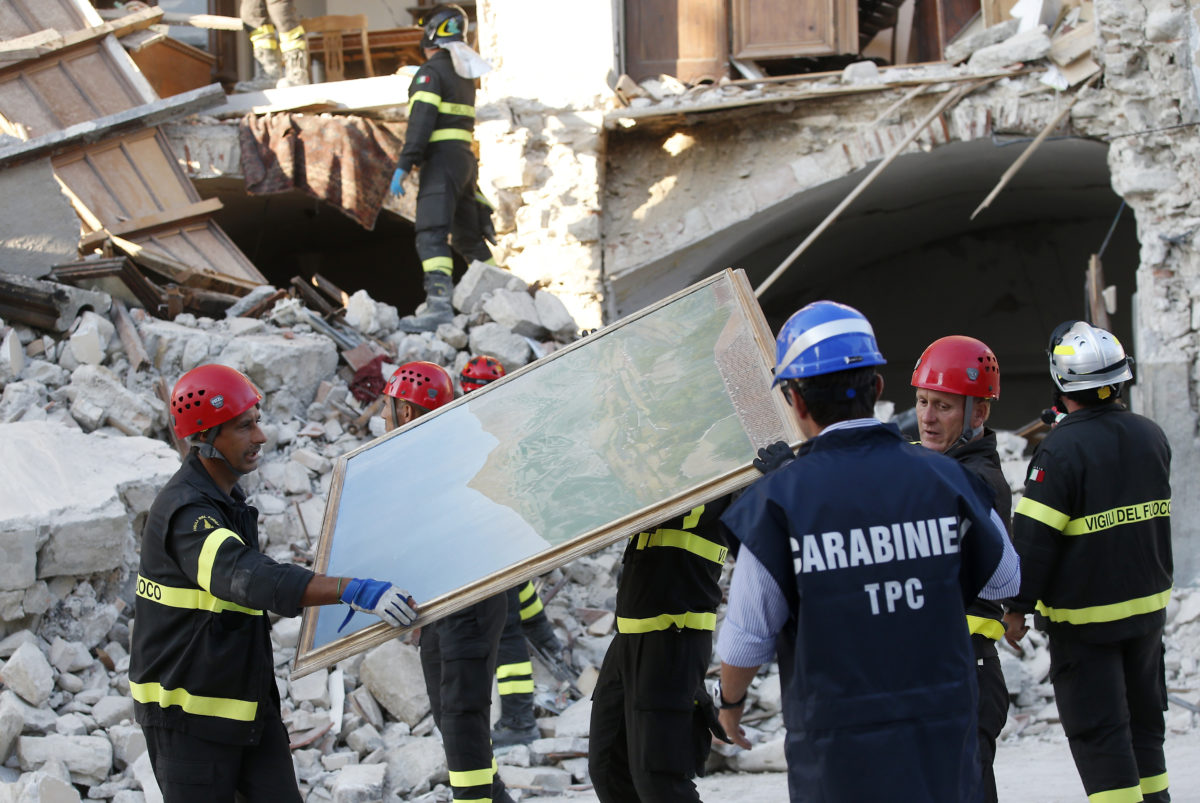 By VANESSA GERA and HAKAN KAPLAN, Associated Press
AMATRICE, Italy (AP) — Bulldozers with huge claws pulled down dangerously overhanging ledges Sunday in Italy’s quake-devastated town of Amatrice as investigators worked to figure out if negligence or fraud in building codes had added to the quake’s high death toll.
The quake that struck before dawn Wednesday killed 290 people and injured hundreds as it flattened three medieval towns in central Italy. Giuseppe Saieva, the prosecutor in the regional capital of Rieti, said the high human death toll “cannot only be considered the work of fate.”
Investigations are focusing on a number of structures, including an elementary school in Amatrice that crumbled despite being renovated in 2012 to resist earthquakes at a cost of 700,000 euros ($785,000). No one was in the school at the time, but many were shocked that it did not withstand the 6.2 magnitude quake.
After an entire first grade class and teacher were killed a 2002 quake in San Giuliano di Puglia, Italian officials had vowed to ensure the safety of schools, hospitals and other critical institutions.
Questions also surround a bell tower in Accumoli that collapsed, killing a family of four sleeping in a neighboring house, including a baby of 8 months and a 7-year-old boy. That bell tower also had been recently restored with special funds allocated after Italy’s last major earthquake, which struck nearby L’Aquila in 2009.
Italy’s national anti-terrorism prosecutor, Franco Roberti, also vowed to work to prevent the mafia from infiltrating in public works projects to rebuild the earthquake zone.
“This risk of infiltration is always high,” he said in comments Sunday in the La Repubblica newspaper. “Post-earthquake reconstruction is historically a tempting morsel for criminal groups and colluding business interests.”
Roberti said, although he does not wish to prejudge the outcome of the investigation into the area’s damaged buildings, the high number of public buildings to collapse in the quake raises suspicions.
He said if buildings are well-constructed according to regulations for earthquake zones, “parts of buildings can be damaged and cracked but they don’t pulverize and implode.”
Italy’s state museums, meanwhile, embarked on a fundraising campaign, donating their proceeds Sunday to relief and reconstruction efforts in the earthquake zone.
Wednesday’s quake destroyed not only private homes but also churches and other centuries-old cultural treasures. The idea is to use art for art — harnessing the nation’s rich artistic heritage to help recover and restore other objects of beauty in the hard-hit towns.
It’s one of several efforts that have sprung up to help the towns rebuild: restaurants in Italy and elsewhere are also serving up pasta all’Amatriciana, the region’s most famous dish, in another fundraising effort.
Also Sunday, Pope Francis vowed in his weekly address from a window over St. Peter’s Square to visit people of the earthquake region soon and bring them “the comfort of faith.”
Amatrice bore the brunt of earthquake’s destruction, with 229 fatalities and a town turned into rubble and dust. Eleven others died in nearby Accumoli and 50 more in Arquata del Tronto, 10 miles (16 kilometers) north of Amatrice.
Overnight was relatively calm, the first since the quake struck without strong aftershocks. In all, the region has seen 1,820 aftershocks, according to the National Institute of Geophysics and Volcanology.
On Saturday, a state funeral took place for 35 of the victims in the town of Ascoli Piceno, where mourners prayed, hugged, wept and even applauded as coffins carrying earthquake victims passed by ahead of being buried.
“It is a great tragedy. There are no words to describe it,” said Gina Razzetti, a resident at the funeral.
Saturday’s funeral involved most of the dead from Arquata del Tronto. Many of the dead from Amatrice, however, are still awaiting identification in a refrigerated morgue in an airport hangar in Rieti, 65 kilometers (40 miles) away. On Tuesday, a memorial service — without the bodies — will be held for the dead of Amatrice.
Nobody has been found alive in the ruins since Wednesday and hopes have vanished of finding any more survivors. The number still missing is uncertain, due to the many visitors seeking a last taste of summer in the Apennine mountains.
Hundreds of people have also been left homeless by the quake, with many spending their nights in tent cities and a gym in Amatrice. Longer-term housing needs for earthquake survivors will be another key challenge for Italian authorities.
___
Gera reported from Rome. Frances D’Emilio in Rome contributed. 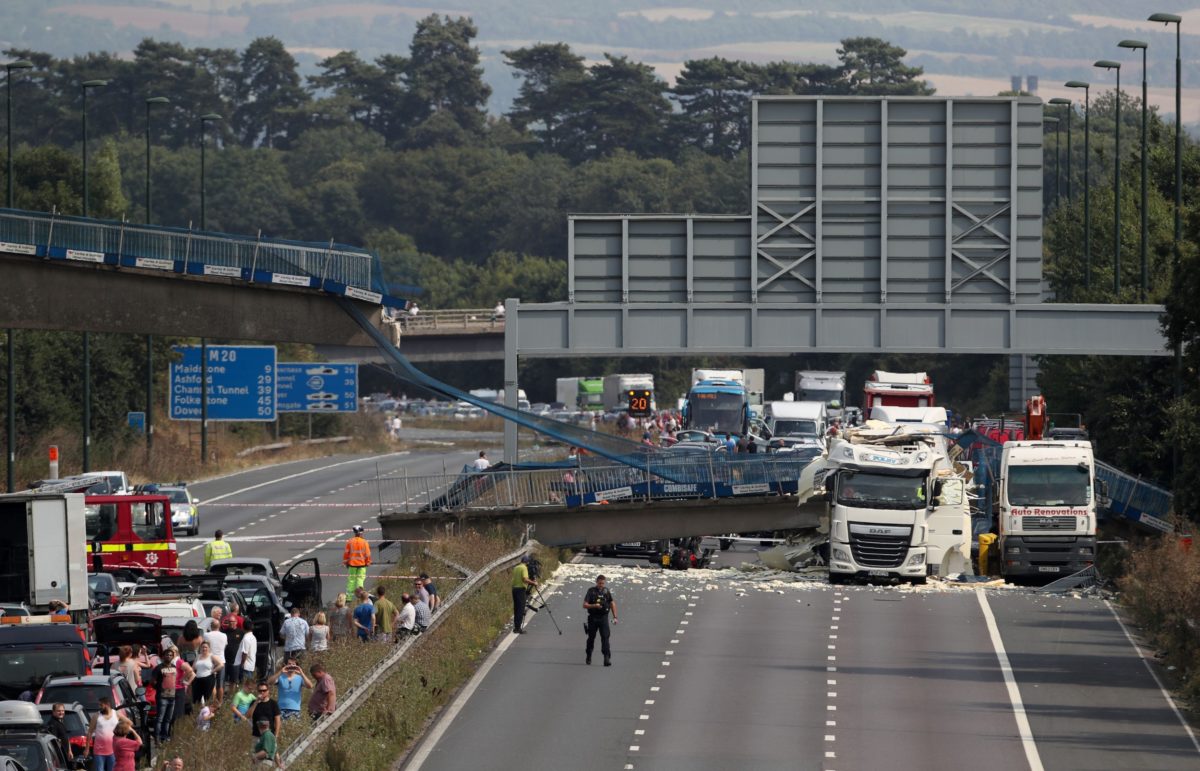 LONDON (AP) — A major British highway linking London with key cross-Channel routes remains closed for a second day as safety officials remove rubble from a collapsed bridge and make sure the rest of it won’t fall down as well.
The M20 highway running southeast of London has been closed since midday Saturday, when a westbound truck struck and partly destroyed a pedestrian bridge. A motorcyclist fell off his bike and was hospitalized with broken ribs, while the trucker was treated for shock.
Highways England had hoped to reopen the M20 by midday Sunday. But spokesman Stuart Thompson says the safety checks are proving “very complex,” particularly on the part of the bridge that still looms over the highway’s eastbound lanes.
Safety officials are installing motion detectors to confirm the bridge remains stable.