Sherriff Drammeh knocked down a jumper to pull the Rainbow Warriors (3-1) within 46-42 in the second half, but Lindsey Drew hit two 3-pointers and scored all eight of his points to help push the Wolf Pack’s advantage to 55-47.

Brocke Stepteau came off the bench to score 10 for UH. No other Rainbow Warrior reached double figures. Jack Purchase had eight rebounds for Hawaii, but he missed all seven of his shots. UH’s bench kept it in the game, outscoring the Nevada bench 26-8.

The University of Hawaii women’s basketball team outscored Marist 19-6 over the last half of the fourth quarter, and the Rainbow Wahine extended their winning streak to four games with a 70-63 victory in their Rainbow Wahine Showdown opener Friday night at the Stan Sheriff Center in Honolulu.

The Red Foxes led 47-46 after three quarters and eventually widened their lead to six points with Rebekah Hand’s layup with 6 minutes remaining before Julissa Tago’s jumper started a 12-0 run that put UH ahead for good.

Sarah Toeaina led the Rainbow Wahine (4-1) with 14 points. Tago finished with 13 points, Makenna Woodfolk had 12 points and 10 rebounds, and Tia Kanoa had eight assists for UH, which shot 23-of-51 from the field.

HILO, Hawaii (AP) — West Hawaii Today government reporter Nancy Cook Lauer is being honored for her work in breaking the story of former Mayor Billy Kenoi’s misuse of a county-issued credit card, known as a pCard.

Cook Lauer said she has won many awards, but this one means the most because it’s “in recognition of almost five years of persistent questioning, trying to get at the facts despite government stonewalling.”

Kenoi admitted before the county Board of Ethics in 2016 that he violated the purchasing policy by misusing his county-issued purchasing card. He was acquitted during a criminal trial shortly before he termed out of office.

The state based its charges on 15 pCard transactions totaling more than $4,000 from 2011-14 that it argued were personal expenses or did not include receipts. Kenoi reimbursed 14 of them. The reimbursements occurred between four and 26 months after the transactions took place.

“To be a reporter, you have to have a thick skin,” Cook Lauer said. “You can’t be all gaga over celebrities or top government officials.”

KAILUA-KONA (AP) — Officials are expecting more than 20 vacancies with the Hawaii Police Department by year’s end due to retiring officers.

Officials addressed the Hawaii County Police Commission on Friday, saying that in the next month there would be close to 20 retirees, including eight ranking officers, West Hawaii Today reported .

Officials in September said more than 55 officers had enough time on the force where they could retire.

Assistant Chief Marshall Kanehailua said the number of retirements is unusual and the department will have to recover from them.

Maj. Samuel Thomas projected there will be 21-23 vacancies near the end of 2017.

“We’ve seen this cycle happen many a time,” said Thomas, who has been with the department for 35 years. “When the economy is real poor, then we’ll get a lot of applicants. . . . At one point we had 100 vacancies for sworn officers. We only caught up when the economy went bad.”

HONOLULU (AP) — An Oahu community group is in the process of handing out 1,000 water rescue tubes.

The campaign is a citizen-led effort by Hawaii Kai Lions Club Treasurer Eric Kvick in partnership with the Rescue Tube Foundation on Kauai, the Honolulu Star-Advertiser reported Monday.

Kvick gave away 100 rescue tubes at Maunalua Bay in April to first responders and private homeowners who live on the water. One of his tubes is mounted on a pole at the popular east-shore spot known as China Wall — and was used in September to save a life.

Kvick said another tube that he posted at Spitting Cave helped save someone in August.

The tubes, about 4 feet long, are the same as the ones used by lifeguards except without metal clips on the end. They cost about $80 each, shipping and hardware included.

“I’m pushing for 1,000 tubes and to make it happen sooner rather than later instead of waiting for someone drowned here,” said Kvick, a painting and carpentry contractor. “Let’s get the tubes there before it’s in memory of someone.”

The tubes are stationed, so far, at Spitting Cave, China Wall and on a private property in Kailua.

Branch Lotspeich, executive director of the Rescue Tube Foundation, has made it his mission to lower the number of drowning deaths not only in Hawaii but around the world by making the tubes available.

“The reason we’re putting these rescue tubes out on the beach for family members, friends or good Samaritans to use is in fact to protect the rescuer,” he said. “By providing the rescuer with this flotation device, they’ll be able to go out and rescue someone. That’s happened time and time again.”

The program, in its ninth year, started as an outgrowth of the Rotary Club of Hanalei Bay’s efforts, Lotspeich said. A citizen placed the first tube on a shrub at the remote Larsen’s Beach on Kauai’s North Shore in 2008 and within the first few weeks, someone used it to rescue a friend, Lotspeich said.

Now there are more than 200 rescue tubes around Kauai shorelines, including Queen’s Bath in Princeville, as well as some on the Big Island, Maui, Oahu and the Mainland.

KHON2-TV reports that the couple arrived Nov. 3 and spent less than 24 hours on the island before departing for Asia.

Various city departments worked with the U.S. Secret Service to ensure their safety. The largest share of overtime cost was borne by the Honolulu Police Department at $100,630.

Since Trump’s visit was not designated a National Special Security Event by the U.S. Department of Homeland Security, the city does not expect to be reimbursed for the costs associated with the overnight visit.

HONOLULU — A Turkish man who said that a hallucination about a butterfly caused him to disrupt a flight from Los Angeles to Honolulu won’t receive additional jail time under terms of his sentence handed down Monday.

Anil Uskanli was sentenced to the six months that he has spent locked up after the incident that triggered bomb-threat procedures and officials to scramble fighter jets to escort the plane to Honolulu. He was also ordered to pay American Airlines more than $8,500.

Uskanli’s behavior on the May flight was concerning, including when he walked to the front of the plane with a blanket wrapped around his head and carrying a laptop that crew members feared contained explosives, prosecutors said.

After Uskanli returned to his seat and with an off-duty officer sitting with him, the laptop remained on a drink cart, which prompted the captain to initiate bomb-threat procedures.

The Hawaii National Guard scrambled two fighter jets to escort the plane to Honolulu. The secretary of Homeland Security was briefed.

Last month, when he pleaded guilty to interfering with a flight crew, Uskanli blamed his behavior on the hallucination.

A butterfly suddenly came out of the pocket of the seat in front of him, Uskanli said at his guilty plea hearing. He said that the butterfly was going crazy and he tried to kill it.

He said he now realizes that he was ill and hallucinating.

Uskanli raised red flags while at Los Angeles International Airport, but experts said a lack of communication and an airline’s hesitancy to be caught on video booting a passenger played a role in allowing him to fly.

Uskanli had purchased a ticket at an airline counter in the middle of the night with no luggage and was arrested ahead of the flight to Hawaii after opening a door to a restricted airfield. Airport police said that he smelled of alcohol but was not intoxicated enough to be charged with public drunkenness, so he was given a citation and released.

“Our office is happy with the sentence and we think it was fair in this case,” said Assistant U.S. Attorney Morgan Early.

A deportation hearing is scheduled for next week, said Gary Singh, his immigration attorney. “He just wants to go home,” Singh said.

Honolulu’s Michelle Wie follows the flight of her ball during the final round of the LPGA CME Group Tour Championship on Sunday. Wie, who entered the day in a four-way tie for the lead, shot a 2-under 70 to finish tied for sixth at 12 under.

The University of Hawaii women’s volleyball team reached 20 wins for a 24th straight year Saturday, concluding its regular season with a 25-20, 26-24, 25-16 win over UC Irvine on Saturday in Irvine, Calif.

Harlee Kekauoha had 12 kills for the Ant­eaters. Makayla Wolfe had seven.

Hawaii finished second in the Big West, and will learn on Nov. 26 if it will receive an at-large berth to the NCAA tournament. 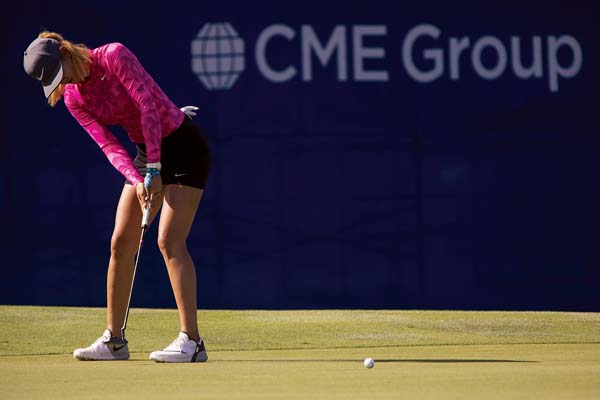