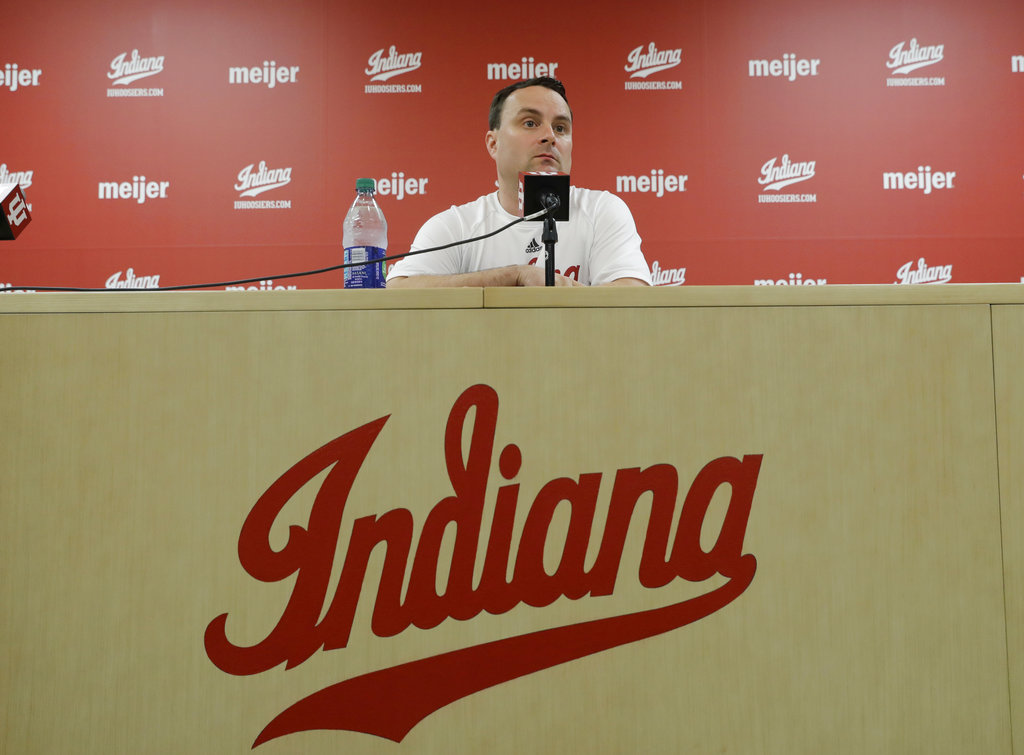 By MICHAEL MAROT, AP Sports Writer
BLOOMINGTON, Ind. (AP) — Coach Archie Miller came to Indiana to win championships. His players expect it, too.
Shortly after Miller sat at a dais inside Assembly Hall and explained his definition of a successful season, the Hoosiers gave their presentation.
“We expect to win, bottom line,” senior guard Robert Johnson said Thursday. “I think we have the talent. I think we have enough experience to do what we set out to do.”
Miller wants his new team thinking that way.
Fans, on the other hand, are understandably wary.
They’ve heard every coach over the past 30 years, from Bob Knight through Tom Crean — five in all, promise a sixth national championship banner. None has delivered.
They’ve watched the Hoosiers go from NCAA Tournament regular to NCAA Tournament part-timer, rebuild after an NCAA scandal gutted the program and endure the embarrassment of a series of off-the-court problems.
The result: Indiana has been to one Final Four since 1993 and has become accustomed to the twists and turns normally reserved for programs in transition.
Athletic director Fred Glass is betting that the gritty coach can smooth out some of those rough patches and help the Hoosiers reclaim their spot in the national conversation.
It’s why Miller took the job in March, and it’s why he’s preaching patience for now.
“We have to become the best team we can be. We have to not only learn one another, we have to develop chemistry,” Miller said. “It’s just day to day and as we get to the games, we’ll see. The expectation level for us is to be ready every single day.”
While those sentences weren’t written for the movie “Hoosiers,” they demonstrate how masterful Miller has become at talking to Hoosiers’ fans in a language they understand.
Throughout his 26-minute news conference, Miller demonstrated used terms like Indiana defenders and East Coast guards, assessed roles and leaders while discussing conditioning, spirit and, of course, defense.
“We’ve spent I’d say 75 percent to 25 percent defense to offense,” Miller said. “We’re having the base stuff put in. We’re not as sophisticated as we want to be. It’s an adjustment, it’s’ repetition after repetition, it’s technique after technique, it’s film after film. But sometimes it’s going to take games. They have to be in games. I don’t think we’re going to be, on Day 1, the Steel Curtain.”
Nobody could ask that much of the Pittsburgh native and obvious football fan.
The ex-Dayton coach and North Carolina State star begins his first official practice with credentials that have impressed his players. He won at Dayton as a head coach and at Arizona and Ohio State as an assistant, and what the players like is the knowledge he brings to the bench from his playing days.
All of that should help get things back on track.
But there is one thing Indiana fans won’t tolerate: Rules violations.
So less than 24 hours after an assistant on the staff of his older brother, Arizona coach Sean Miller, was suspended and relieved of all duties as part of the FBI corruption probe that has rocked the college basketball world, Miller added his voice.
He said he’s already met with Glass several times since the arrests were announced Tuesday and there is no indication that Indiana’s program was involved.
Miller also said he’s spoken briefly with his brother once, to offer support. Still, he was shocked by the allegations.
“I think everyone’s probably taken a step back and is a little reserved or guarded,” Miller said. “But as you look at your own players, you have to remind them to do things the right way and I have no reason to believe that they are not.”
The only more daunting issue heading into Friday’s practice is how long will it take Miller and the Hoosiers to get everything in sync?
Players insist they can finish the job quickly.
“Not only me but my team,” slimmed down forward De’Ron Davis said when asked if he expected to play a dominant role in the Big Ten this season. “All of us, the whole team, not just me individually want to have a big impact on the Big Ten, especially after last year.”
___
For more AP college basketball coverage: http://collegebasketball.ap.org and http://twitter.com/AP_Top25 .